Why .IN and .CO.IN makes perfect Domain Strategy for Business

India Domain Names News (.IN / .CO.IN) : Two companies this week were busy, (Simon.co.in bought Simon.in) and (Myfitness.co.in bought Myfitness.in ) . India introduced .co.in extension in 2003 when many businesses registered them and in 2005 they rolled out the .in extension to the public.

What that caused is many businesses are operating on .co.in while others on .in . Smart and savvy business are figuring out that they need to own both versions .in and .co.in , both get traffic in India and there could be brand confusion in the marketplace if two different businesses own the two versions.Several companies have continued to use .co.in since they started, this could be primarily because it reflects they are a "Company of India" and that might be important to them. .IN users believe that shorter is better and it looks better in advertising etc. Ultimately its about market perception and usage trends that will dictate the future. But for most business, its not about .in or .co.in , it makes sense to acquire both - or lose traffic , create brand confusion and intellectual property issues. #domainnames #domains #india #ecommerce #branding #marketing #advertising #seo #online #website

Popular posts from this blog

Domain Pricing Factors - .in and .co.in 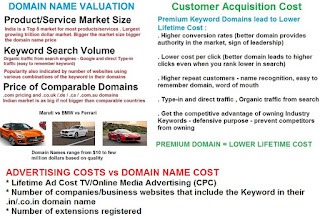 http://sastha.com/domainpricing.html - Search Volume  in India and Worldwide (Google.com Trends, Analytics, Adwords) - CPC  (Cost per Click) for keyword advertising - Number of extensions  registered (DotDB.com) - popularity of the keyword - Market size  in India for Product/Service (keyword) - Comparable domain prices  - .com, .co.uk, .de, .ca, .com.au and other english speaking economies - GDP growth  of India in the next 10 - 20 years - Cost of TV and other Media Advertising  over lifetime vs Cost of Premium Domain Name - Alternative domain extensions  for India and availability - supply vs demand - Number of companies/business websites  that include the Keyword in their .in/.co.in domain name - Number of  Google search results  for Keyword - Number of  Keyword alternatives  in the Niche or Category
Read more

December 01, 2020
Domain Sales News (INDIA) - Last week featured some interesting sales  VPN.in  ,  Matter.in  and  EBO.co.in  .  VPN.in  was bought for $25,000 by a Netherlands based VPN company ,  Matter.in  was bought by Gujarat, India business for about $6800 and  EBO.co.in  was bought for $4000 by a Bengaluru based company. Demand for quality domain names (.in and . co.in ) appears to be on the rise in India and end users (business) are beginning to pay prices that are warranted for high quality keywords and acronyms. #domainnames   #domains   #website   #marketing   #advertising   #ecommerce   #inc42   #yourstory   #startup   #venturecapital   #business   #india   #webdevelopment   #online   #digital   #businesstoday
Read more

VanInsurance.co.uk sold for higher than .com

November 15, 2020
Today Godaddy released their aftermarket sales for June, it showed vaninsurance.co.uk sold for $106,769 and vaninsurance.com for $100,000 . This is probably the first time have noticed a . co.uk sell for higher than .com . This could have reasons such as . co.uk had a less motivated seller and he/she was in a better situation to assess the Van Insurance market . Also here in the US, we don't hear much of Van Insurance but its possibly a bigger deal in the UK. So once again, pricing and valuation of such cctlds (country code extensions) like . co.uk , .in / .co.in or .de and others are going to on a case by case basis. Typical cctlds valuation can range from 5%-25% of .com, but this again a very rough estimate as this sale shows. #domains #domainnames #india #. co.uk #websites #business #branding #marketing #ecommerce #atmanirbarta #inc42 #startup #.in #.co.in
Read more